Twenty-Twenty: A Decade Of Change

Twenty-Twenty Vision: taking a look at the past decade in Manchester and moving forward into a new year

A new year dawns on our city, leaving the last decade behind. We look back on the last 10 years – through all the highs and the lows, a lot has changed.

Manchester has come a long way since its ‘Cottonopolis’ heyday. With new silhouettes constantly appearing on the city skyline, Manchester continues to grow and develop faster than the number of ‘new year, new me’ gym memberships.

We take a look back at the then and now and see just how much Manchester has changed in the last decade.

Probably one of the most notable developments in the last decade is the growth of MediaCity UK, based at Salford Quays. The prime city location has come a long way since its roots as an industrial hub for the cotton industry.

MediaCity began to grow in 2010 as major broadcasters announced their intention to relocate to the quayside location. The BBC announced that their children’s, sports, and later flagship news show BBC Breakfast, would all find a permanent new home in Salford. Plenty of building and development work has taken place since then and it continues to become an increasingly sought after location for businesses and property developers!

Sticking with Salford, if you’ve been anywhere near the city lately, you’ve probably heard the term ‘crane-chester’ being thrown around!

Although somewhat of an eyesore and too numerous to even count; the cranes are a hint at exciting things to come as the city continues to grow and live up to its name of the largest (and the best of course) city in the North.

Already Manchester is being compared to the likes of Barcelona and Melbourne, so with that in mind, those cranes are just a by-product of Manchester continuing its development as a global city.

Another area of the city centre that has changed continuously as we cross into a new decade is Deansgate. Although staying true to its industrious roots with many red brick exteriors and large windows, plenty of new developments in Deansgate are but an echo of buildings that played a key role in Manchester’s lead in the Industrial Revolution.

Deansgate – and Castlefield – has seen a population growth since the beginning of the last decade. Proximity to Manchester’s business districts and the heart of Manchester has drawn the eyes and wallets of many property developers. Buildings have gone up in this area at lightning pace, bringing in more people to the developing city centre. 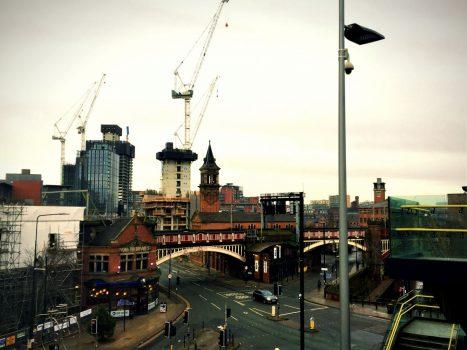 If you haven’t ventured through to Ancoats yet you’re missing out. A surge of new restaurants and bars have moved into what was once the world’s first industrial suburb. Some of the earliest mills of the Industrial Revolution were Murray’s Mills, which were established next to the Rochdale Canal beside Great Ancoats Street, in 1798.

The area has since been recognised as an area of industrial heritage and, despite developments, you can still find the old mill exteriors and terraced housing that mill workers would reside in. The interiors, however, are very different now.

In the last decade, Ancoats has been home to Sankeys nightclub, the Hallé Orchestra and is now home to Manchester’s first Michelin star restaurant – Mana! As we continue into 2020 there are big plans for the area that will see it continue to develop and undoubtedly rise in cool factor. 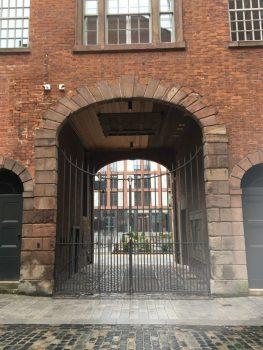 Ancoats mills look very different on the inside

We are looking forward to what the next decade may bring, but no matter what the city looks like, the city’s sense of Mancunian pride will never change.

The heart of the city is embedded in the people and communities of Greater Manchester, and that’s who make this city great. Not the shiny new buildings, nor the exciting new bars, restaurants and cafes. Not even the long-standing football clubs or historic buildings. No, without the people of Manchester and their infallible spirit, none of this would be possible.

The spirit of Manchester lives and breathes in the city streets, carried by those who band together during difficult times. Cheesy though it may sound, Manchester is in the spirit and culture rather than bricks and mortar (even if it is more iron gliders and glass panels these days) and that is why we love Manchester and will continue to love it for the next decade, and every decade after that.

Who knows what the city will look like at the end of the next decade, but we cannot wait to find out!