Relax with a River and Canal Cruise between Salford Quays and Manchester City Centre.

Enjoy a relaxing boat trip as you cruise the historic Ship Canal and River Irwell from the former Manchester Docks, now known as Salford Quays, to Manchester City Centre and return.

Board the Princess Katherine and listen to the onboard commentary as you enjoy this Manchester boat trip between Salford Quays and the city centre for a 60-minute boat trip. There are refreshments available to purchase onboard.

Timings
Regular* departures from Pier 8, which is next to The Lowry Theatre. Boarding is from the Lowry side of the Quays, beneath the Millennium footbridge. Look out for the Manchester River Cruise flags on the riverside path that mark the boarding point.

The Salford Quays boarding point is at Pier 8, which is beneath the Millennium footbridge, behind The Lowry theatre.

The boat docks at in Manchester city centre at Ralli Quay, opposite the People’s History Museum and the Dockyard Pub.

Boarding is from Pier 8, beneath the Millennium footbridge, behind The Lowry theatre.

Please ensure you arrive at least five minutes before stated departure time; the Princess Katherine cannot return to the quay once departed. 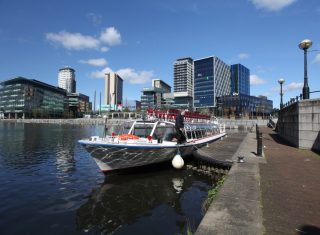 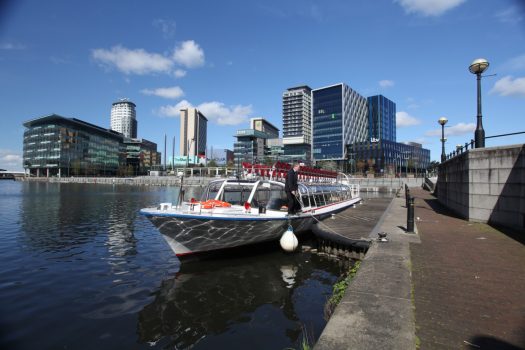